Thanks to Lynne, Paul and Tamara for hosting this months beer and beads. Their studios are amazing, their yard beautiful and their apple tree loaded. The pizza was excellent and the attendance was good again at 18 members.  Of course, David (Joanne Carter’s hubby) arrived in style.  What a car! 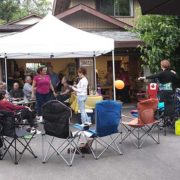 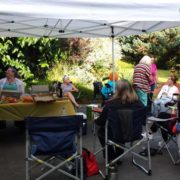 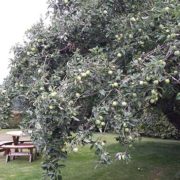 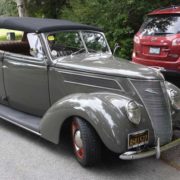 Demo’s consisted of Paul demonstrating the equipment he uses to make beautiful bevelled edges on glass.  Some members gave it a go with his assistance. 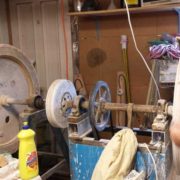 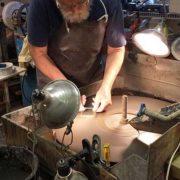 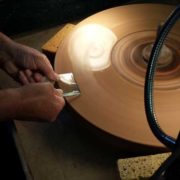 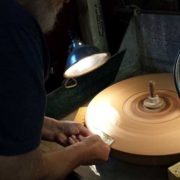 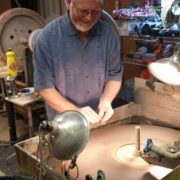 Tamara demonstrated her sea slug bead.  Below is a play by play on how she made this bead.

Tamara used boro clear as a punty to pull cane.  She used CIM Marshmallow as a core and light aqua and peacock around the core.  She used a hot plate to warm up the small pieces of her aqua and peacock.  Alisha had another idea of using a frying pan rather than a hot plate.  She then pulled the can straight not twisting.

Tamara used CIM clear as a base for the slug and then Reichenbach Mystic Blue over the clear leaving gaps and then filling in the gaps with CIM Halong Bay.  Using gravity to create the head and the tail (you can choose which end will be which nearer the end).

Then the speckles were put on the bottom of the slug with dots of adventurine stringer to add a bit of bling and a lighter coloured dot.  After melting in the dots you rake the sides.  Then shape the face.

Now the most important part – build the sides with stripes of Mystic Blue (build up three sides – sides and the top) and then add stripes of Peacock (remember to keep the small rod pieces warm before putting on the bead) and then flatten and two sides and top with a small masher pulling and flattening.  You want to create 3 wings.

After the wings are created (about ½ inch) then take your tweezers and using a twisty bending motion with the tweezers make a ruffle of all three wings. Add the antennas on its head and then you are done!

With practice your bead will resemble the sea slug that Tamara created. 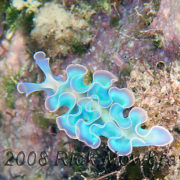 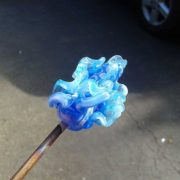 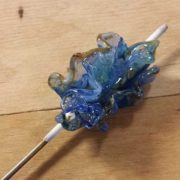 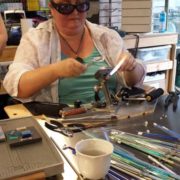 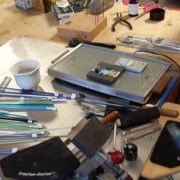 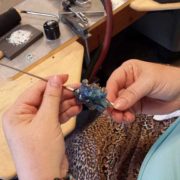 Once again, thanks to Lynne, Paul and Tamara for hosting and to everyone who turned out to make this another great event.

See you in August at the next Beer & Beadz.